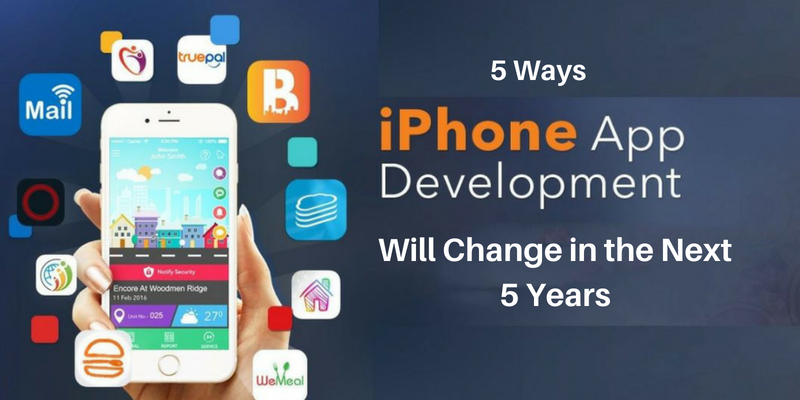 Phones have become an indispensable part of lifestyle and who does not want to own an iPhone today. iPhone has enticed people with its beautiful design and exquisite features to an extent such that every 4th person owns an iPhone these days. Each time with the launch of their new phone, there is always a sense of surprise that one feels when they intend to buy it. When we talk about the future of the iOS app development, there are certain things that need to be pin-pointed which are as follows:

Augmented reality is one of the best features that would be available on iPhones where the users would be able to get access to the real and virtual world features at the same time. This is achieved with the latest ARKit feature that is available on their phones.  Although these features are limited till now and it is estimated that in the next five years, the technology would eventually expand and the users would be able to make to-do list, perform searches and play games through their AR features.

The voice system that is available in the iPhones i.e., Siri, would improve to a much better version where it would be able to run the full day schedule and do complex tasks whenever you want. It is also said that the SIRI might be able to incorporate several other iOS apps that would increase its functionality. Earlier, SIRI too had to receive mixed reviews from the technologists, but now it is one of the best things that is present on iPhone.

The current running iOS development projects that you would find today happen to follow two separate ways with the mobile app as one and the MacOS as another. However, it is believed that this issue with the apps would be solved in the coming years where you would be able to access universal apps on both the mobile phones and the MacOS. This would enhance the functionality of the apps and make them more useful than ever before.

Redesigning Of Apps According to the Phone Style

In coming years, it is estimated that the iPhone would have a better design with fast processor and long-lasting battery along with a few other features such as wireless. With this, the apps would become better and that would automatically change the way the phone works. Several other important features that matter in a phone include the camera, an authenticator and a router, which need to function well. In that case, the iPhone apps would need to be enhanced in order to fit in the phones and that would increase their complexity as well.

The Display Would Be Better

With increase in screen size, iPhones will replace tablets and their desktop counterparts. We can expect better screen formats in coming time, in different sizes depending upon the technology trends.  Moreover, the screens would also become more flexible and almost unbreakable which is the best feature that a phone can have. The design might even be available in a 3-D format which would be certainly increasing the display quality of the phone. It would be water resistant and would be more robust. Moreover, with the introduction of the MicroLED technologies, it would become easier for the phones to have better picture quality in the coming years.

Flower Boxes Are Great Gifting Options: Find Out Why! Cocos Island Accommodation provides a Beachside Holiday in an Untouched Paradise.