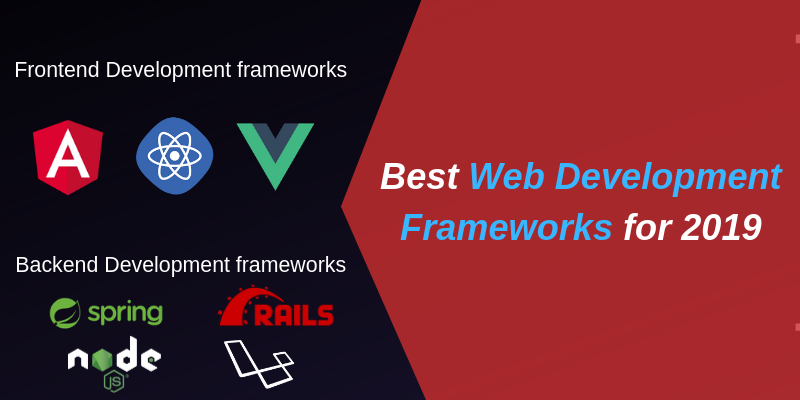 Just when we thought web applications are at the verge of oblivion with mobile apps taking the center stage, they have made a spectacular comeback with new features like notifications, progressive web apps, and more. As a result, they play a critical role in user engagement and for that reason, businesses are prioritizing their web strategies. Now, any product is only as good as the tools used to build them. So if you want to build the finest of web apps, you’d need to deploy the finest of frameworks.

As you may already know, web development consists of two distinguished parts- frontend and backend. As both these parts use different technologies (barring a few exceptions like JS), they are generally developed through different frameworks. Keeping that in mind, we have segregated our list into such categories.

A product of Google, Angular is widely recognized as the best framework for client-side development, particularly for single-page applications. A completely revamped version of original AngularJS, it is known to be extremely stable, feature-rich, and performant. Though there are some issues with SEO, it’s nothing that can’t be optimized.

Built to exploit the full benefits of ReactJS libraries- something that’s been used by Facebook for a long time in internal development, it’s most widely recognized for its virtual DOM that makes DOM manipulation much easier. Its component-based architecture makes it easy to build highly expressive applications and handles dynamic content really well.

While Vue has been around for quite some time, it has started gaining traction only recently and some even recognize it as the next best framework for web development. Besides having most of the benefits of other frameworks, some of its unique features include its progressive approach that lets you deploy Vue for only a part of your project without affecting other components.

This is the de facto choice of framework for Java developers looking to build web applications. With numerous sister projects and lots of support tools, building web applications on Spring can be a breeze but only if you have experience in Java. For others, the steep learning curve would far outweigh the benefits it offers.

Though some call Ruby a dead language, it still powers some of the finest web apps and has maintained its core set of the loyal user base. One of the key highlights of Rails is its scalability and quick learning curve that attacks many new developers. Though there are some production issues with this framework, you can still build high-quality apps if you are willing to put in the requisite effort.

NodeJS isn’t exactly a framework but given its immense popularity, it’s impossible to not mention it in a discussion of web development. Built on Chrome’s V8 engine, it a runtime environment that works on “JavaScript everywhere” model. Yes, it is NodeJS that essentially brought JS to the backend development and for that reason delivers unparalleled performance. Since it eliminates the need for rendering and works exceedingly well with NoSQL databases, the speed, and stability of NodeJS applications is remarkably better than the others.

If you wish to use PHP at the backend, this is the framework you should opt for. Known for its seamless setup, easy management of common tasks, and a large collection of libraries, Laravel enables you do build full-scale applications with minimum effort.

If you find the variety of frameworks overwhelming and struggle to find experts on any particular framework, you can get in touch with web application development companies in India to find your desired skills and expertise. Being a hub of IT outsourcing, they tend to have highly diversified and large resource pools to handle projects of varieties and scale.

Things to Consider When Opting for a Conveyor Belt Home remedies for youthful skin!

10 Apps That Could Help In Academic Learning

What Are the Seven Critical Components of a Computer

Things to Know before hiring a Social Media Marketing Agency