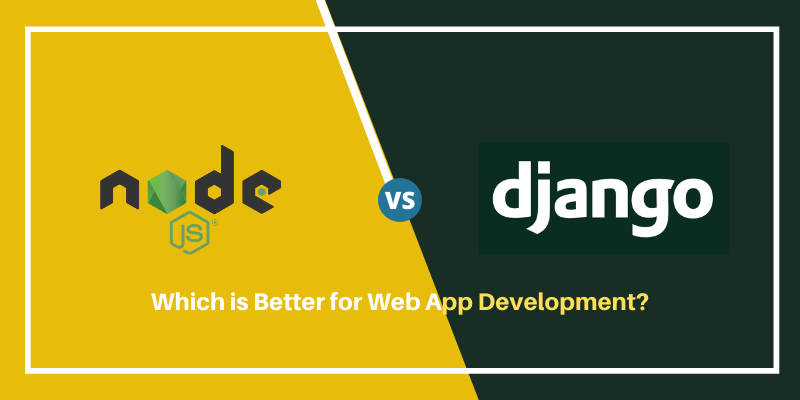 To understand the difference between Django and Node.js, we have to understand their programming languages ​​and data capabilities that form the core of both platforms.

Although a planning face is done for a mobile or web development project, programming teams have to make decisions about the choice of the framework they use to design and govern the apps they build. This particular choice mainly depends on the overall business needs of the project along with the skills and specific expertise of your team. However, other factors should also be taken into consideration, for example, whether the Django and Node.js development team wants something that is unique or something that needs a lot of customization.

To meet the needs of web and mobile app developers, we primarily have two popular open-source framework options – Django and Node.js. Each framework is unique in itself and the use of any framework depends on the type and complexity of the project. This article will give you an overview of the history and important features of both the settings. In addition, we will review key comparison points that are responsible for helping developers choose which framework for their mobile devices and web application development projects.

Django has many advantages, especially in the area of ​​data handling, support and process acceleration. Let us look at them one by one:

The Django model works on a template view framework that converts data into a specific model and verifies the application logic. Finally, it sends that particular model into templates that help structure the data. Django is enriched with a built-in templating language system that generates HTML, separates logic from views, enables reuse of code, and filters content before accessing the browser.

This Python-based framework gives developers access to multiple numbers of installed Python libraries. A form library is also provided by the framework that presents the HTML format in a simplified manner. Therefore, you get more front end design control as developers can ensure linking between specific matches with an application to match visual appearance.

In Django a range of security features can also be accessed by developers. For example, the framework has mechanisms in place to insert secret, user-specific tokens in post requests that help defend against cross-site scripting and request forgery. The framework also provides other features that specifically protect against SQL injection attacks.

Django has three main limitations such as capture, request handling and component packaging. Let us try to explain them one by one:

1. Risk of catching in Django

This is due to the modularity of the framework, developers can ensure that each element of the stack will function independently on its own. However, maintenance to hold an entire site requires careful configuration for the cache manager.

Despite proficiency in building web and mobile applications, the ability to handle multiple requests is quite limited.

Deployment in Django can be quite misleading as many components are joined together in the framework, for example, all models are included in a single file. In addition, it can be quite difficult to identify and minimize the default errors inherited from the template.

Node.js is famous for providing pre-written code and class libraries for both simple and complex data structures. Let’s discuss some of the main benefits of Node.js that make it attractive:

Through JavaScript, developers are allowed to write front and back end application application code in JS. This helps them to create reusable code and modules that they can retrieve without any problems.

Many simultaneous operations can be handled by JavaScript as it excels with real-time systems. Node.js is an event-driven framework in which requests are placed on an event loop, processed, and delegated accordingly. By this, applications and services can handle multiple requests at a time which is of great benefit to distributed application systems.

Programmers do not need to declare a strict plan when developing a database so that they can easily convert database entries to objects of JavaScript to simplify data entry.

The NPM repository, called the Node Package Manager repository, provided a lot of development packages that developers could browse for the specific functions, features, and components needed for their projects. In addition, developers can employ node package manager tools that help to publish projects, streamline package installation, manage versions, and control dependencies.

Node.js has an async.hooks module that provides an API whose job is to register calls and track asynchronous requests made in Node.js applications. Scalability is also provided by allowing developers to access a module cluster and run multiple instances on an app inside a device. Here’s why to consider Node.js for development.

With so many benefits, the framework also has some drawbacks which are:

Despite being effective in handling asynchronous requests, the code in Node.js still follows single-threaded execution. This means that it is still quite dangerous to use for heavy, long-lasting CPU operations or machine learning programs. This is due to the fact that parallel code processing can possibly block servers.

While it can handle asynchronous requests, developers run the risk of overloading the number of calls attempts to handle the app at once. Due to this, overall performance can be severely hampered and eventually the code becomes difficult to clean.

JavaScript libraries have some drawbacks that are then inherited in Node.js such as database operations or XML compliments. These limitations are very disappointing for developers as they are denied access to Node.js. I cannot get the right amount of relief.

Finally, we conclude by saying that both frameworks – Django and Node.js have their strengths as well as drawbacks. Therefore, it is very difficult to pass a decision on which one to choose. However, all the benefits and limitations we have discussed above will help you in analysing which one to make a final call to Node.js vs Django.

The Demand for Testing Banking APIs