Do you know these 12 Best Australian Day Walks

As that time of year approaches, where diets and healthy eating go out the window, we thought we’d give you all a little present. A gift that keeps on giving, you might say.

Slowly unwrap them as the year progresses, or binge them all and walk your way back to fighting weight. Twelve of the best Australian day walks folks. Happy Christmas – Enjoy!

We thought we’d start with the best. In our opinion anyway. The walk to the top of Mount Gower is not only spectacularly beautiful, with the views over Lord Howe Island getting better with each step, but it’s also the only place in the world where you’ll find Providence Petrels, for example.

The plateau at the top of the walk is a totally unique biosphere. With endemic flora that can only be found right here, as you’re sprayed by the salty wind looking down at the coral reef far below, or up towards the horizon at Ball’s Pyramid, the tallest sea stack in the world.

Tolkien fans will feel strangely at home, apart from when they’re skirting some of the cliff edges and holding their breath! It is a challenging walk for sure, but well worth the effort.

It would be a shame to go all the way to Kings Canyon without getting up early in the morning, and having a crack at this walk. You’ll start by climbing up to the top of the rim, which can bring a sweat on to say the least, but once you’re up there it’s a lot easier.

You’ll walk through an incredible variety of landscapes, and about half way through you’ll reach the Garden of Eden – a shady oasis with a beautiful watering hole, surrounded by rare vegetation. The Watarrka National Park also has its own mini Bungle Bungles, comprised of the distinctive red ochre that’s made the area famous – a pretty amazing place overall.

After the initial hike up it’s not too tough, but it’s the heat that’s the main issue here, and if you haven’t set off by 9am, you’re advised not to go.

Once seen as a virtually impenetrable barrier by early settlers, the Blue Mountains are now criss-crossed with a number of incredible walks, and the best winds its way along the Grand Canyon – an impressive gorge that’s been carved into the landscape over millions of years.

First opened in 1907, hundreds of thousands must have taken in the delights of this day walk by now. You’ll start by navigating down the steep terrain of Grand Canyon Creek, passing silver-bark ashes and black wattle trees, then following the undulating paths surrounded by coachwoods, sassafras and giant ferns.

Before you finish you’ll have splashed your way through several creeks, cowered under huge sandstone walls and overhangs, and stared in awe at magnificent waterfalls.

The Blue Mountains is also the most diverse eucalypt forest in the world, and there are an estimated 1000 Aboriginal rock art sites dotted around the wilderness. So keep your eyes peeled, and prepare to enjoy one of the most serene walks in the region.

This spectacular Rawnsley Bluff walk climbs the Wilpena Pound Escarpment. It is an epic walk that involves a fair climb, but it’s well worth the effort as the views are some of the best to be found anywhere in Australia. You’ll discover 360-degree views into the pound outlined by the towering mountain of St Marys Peak.

Treat yourself to more views of the Chase and Edler Ranges and see the horizon disappear over the salt lakes to the west. This hike sums up the stunning Flinders Ranges, rugged country with bright blue skies and a unique vivid red and yellow landscape, scattered with some of the most amazing flora and fauna Australia has to offer. Not to mention the ancient history and geology of the land that follows you no matter where you are in the Ranges.

As far as Australian outback walks go, take my word for it, this is one of the best.

The Bibbulum Track itself is 1000kms long, and takes about six to eight weeks to complete, however this little section of it – through the Tingle Forest near Walpole – is a day walk to remember. Mostly because of the Tingle Trees, which are often known as ‘Giant Tingle Trees’, which kind of gives the game away.

Park at the Hill Top lookout car park, and work your way through the winding bush trails, skirting some of the biggest trees on the planet. It feels very far away from the world we live in today, almost as if these giants have been left to take over after we’ve left…

If you have two cars I’d recommend parking one at Sappers Bridge, and walking the full 13kms.

Strangler fig trees slowly suffocating their prey, waterfalls, creeks and a touch of the ancient are features of this mystical walk through Lamington National Park. You’ll find pink-barked, brush box poking up next to 1500 year old trees, and if you visit in Spring you’ll see white orchids hanging onto their enduring burred trunks.

It’s actually the easiest way to access the rainforest canopy in this particular region, and as it’s a pretty easy walk too – it’s the best way to soak up a bit of forest energy, only a stone’s throw away from the Gold Coast.

If you’ve never visited any sections of the vast Gondwana Rainforest before, I can highly recommend this as your first foray into its wonders. 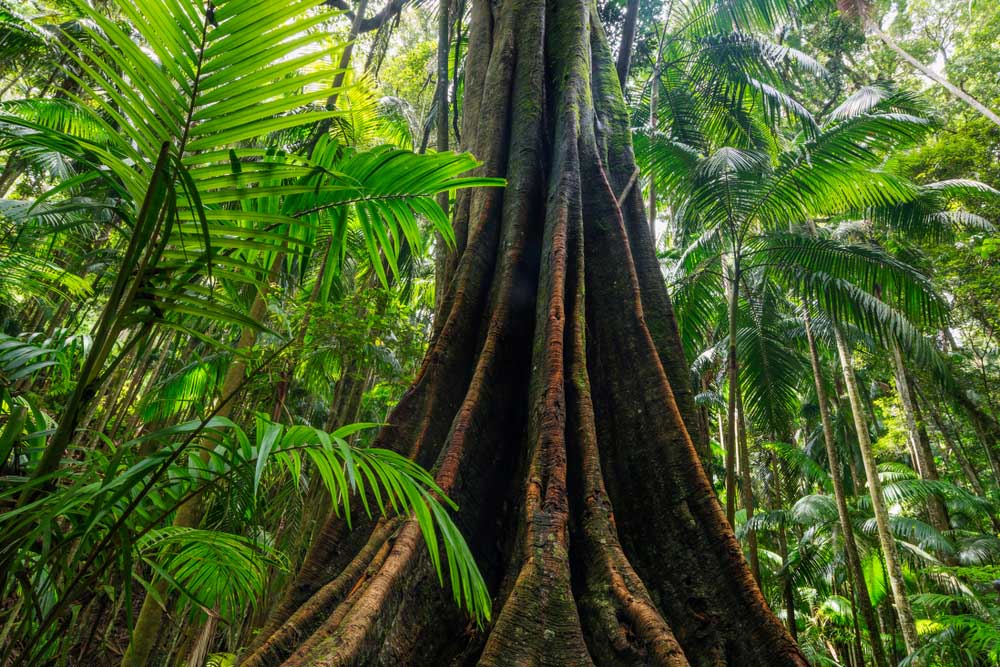 This is a big 21km walk, taking in the highest mountain on the continent, the chilly Blue, Albina & Club Alpine lakes, and constant views of the incredible Victorian Alps. The best place to start is Charlottes Pass, as it allows you to shorten the walk to 11km if you want, without missing Blue Lake and Caruthers Saddle.

Try not to slip off the stepping stones crossing the Snowy River, especially in winter, and as you walk from Caruthers Saddle to Mount Kosciuszko, you’ll have Australia’s highest mountains in view the whole time. Stunning.

Now if you fancy a really early start, this is the place to do it. Wipe the sleep out of your eyes at 3:45 am, get your gear on, grab your head torch and head for the summit of Mount Sonder.

Before long you’ll see the sun rise over the West MacDonnell Ranges, and, having seen the sun rise in many a place in this country – I’d happily argue this is the best. When daylight finally emerges you’ll see spectacular views across the mountains and the surrounding plains.

Mount Sonder is the best known of all the walks on the Larapinta, but I can assure it’s for good reason – and will not disappoint. Even if you don’t start quite as early as 4 am, it’s very hot out here, so you’re best to kick off as early as you can.

This walk is going to be part of the $30M Grampians Peaks Track next year, and it’s going to be bigger than Ben-Hur, so I’d recommend getting in there before the crowds do.

It’s a good long hike up to the top of Mount Rosea but you’ll enjoy every step. Even those where you creep close to the edge of a cliff, take a peek over and slowly exhale. There are lots of overhangs, giant boulders and expansive views opening up every now and again, and you might even see the odd piece of rock art, as the Grampians are known to have more rock art than anywhere else in Victoria.

Follow the yellow arrows from the car park and you can’t go wrong. As well as the views you’ll come across an amazing number of native animals, and the diversity of vegetation is enough to keep amateur botanists content for weeks.

As far as Australian coastal walks go, this one is up there with the best. Setting off from the Fortescue Bay camping area, you’ll climb your way up and down the cliff edges for almost the whole walk. And they’re big cliffs too. Surrounded by big hills. Looking out at the big sea. I’m sure you’re getting the picture. Oh, big sea stacks too – of course.

It’s a well-maintained, and easy to follow track that actually forms the end of the Three Capes Walk, so if you feel inspired, and have a bit more time when you visit next – go for the Three Capes too. Or, if you only have another day up your sleeve, walk to Cape Raoul and detour to Shipsterns Bluff, home of Australian big wave surfing. Yes. Big waves. Enjoy.

Even those who aren’t outdoor enthusiasts know the serrated profile of Cradle Mountain. And for those of us who are, we’ve all experienced the desire to hike around those craggy peaks at one time or another.

So, here’s your chance. It really is as good as you think it’s going to be. Follow the face track from Kitchen Hut for what seems like an eternity, and then it winds its way underneath the mountain itself. Despite its popularity, you can often find a time when there are no crowds, and you’ve nothing but the sight of Dove Lake, and the cleanest air in the world to contend with. Go on, get it off the bucket list. Go for it.

12. The Razorback via Feathertop to Harrietville, Great Alpine Walk, Victoria

Not too far from Melbourne, in an area known as the High Country you’ll find a fantastic day walk that’s a welcome break from the city, where, basically, you’ll walk from one mountain to another.

Starting at Diamantina Hut, follow the Razorback Trail through low shrubs and snow gums from Mount Hotham to the summit of Mount Feathertop – the second highest mountain in Victoria.

You can simply go out and back, marvelling at the views out across Victoria and over Mount Buffalo as you go, or if you drop a car off, you can continue on from the summit, descending over 1400 meters down to Harrietville.

I’d recommend the second option here if you can manage it, as you’ll descend through a beautiful Snow Gum forest and then a magnificent Mountain Ash forest, before arriving at Harrietville and a well-deserved rest aside the Ovens River.

Whatever your choice it’s a brisk walk, in beautiful surroundings with stunning views. Better than a walk down Collins street for sure.

Best Travel Guide to Enjoy A Family Holiday In Egypt

How to Pack a Tent in a Backpack