How Flutter Has Become the Quintessence of iOS Development? 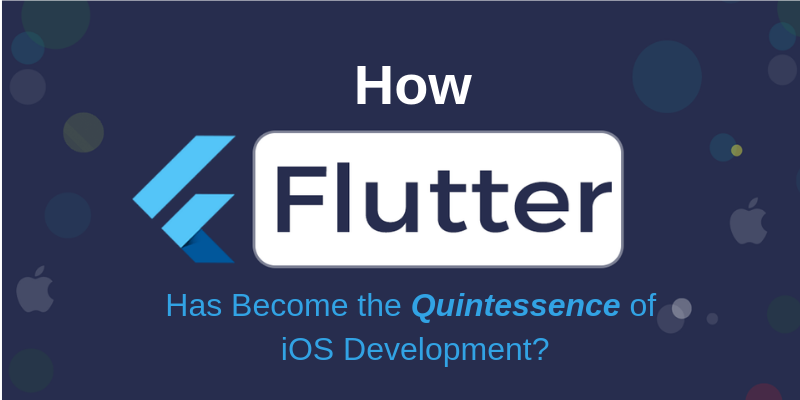 Businesses have to make quick critical choices while selecting mobile technologies. Constant evolution is the key to powerful digital experiences, which work in parallel with every mobile device or operating system. Audience prefers simple to use product or service with comprehensive features, irrespective of the channel, platform or device. This allows them to stay ahead of the competition.

Cross-platform app development can be complex and even problematic. Even if the developer makes their best efforts, use the correct mix of technologies and approaches to make the app behave like their native counterparts, it may lag behind and might not behave as expected. The emergence of various mobile frameworks recently like React Native, Xamarin, AngularJS have definitely eased out coding for cross-platforms and enhanced digital experiences. Flutter is the latest entrant in the cross-platform app development scenario.

Google adopted Kotlin as an officially supported language for Android development in addition to Java and C++ at its I/O 2017 developers’ conference. Flutter originated at the same time parallel to Kotlin.

Flutter is Google’s mobile UI framework that is used for creating high-quality native-like applications for cross-platform development. It is often compared with Native iOS App Development for its ability to deliver fast, expressive, flexible applications. It is free and open-source, comparable with React and Kotlin in performance.

Flutter is a framework for cross-platform app development that makes use of DART (Google’s in-house programming language) that enables Flutter to make use of Skia graphics library used by Chrome; for this reason, it is not directly comparable with Kotlin. It makes code re-use easy. Flutter apps can work equally well on Android, iOS and on Google’s Fuchsia.

It overcomes the traditional disadvantages of cross-platform app development. The code has to be written once and can be used on any platform. Flutter app is binary executable, compiled and ahead of time.

Hot reload feature helps developers check the changes made to a particular state of the app and to the app structure. The modifications can be seen as soon as we save them.

DART programming language enables Flutter framework to create both frontend and backend of the application with a single language.

Flutter makes use of the visual, structural, platform and interactive widgets to create powerful UI.

It wraps a web view in a native app and builds the application as if it were a website.

It wraps native platform controls and provides some cross-platform abstraction over them.

Flutter provides portable runtime to host applications. It is built upon SKIA graphics library, provides widgets that are actually rendered comparable to being just wrappers on native controls.

It can program well with Android Studio and IntelliJ idea plus a variety of other IDE’s and text editors like Atom or Sublime Text.

It integrates with Firebase that enables it to provide services across cloud storages, cloud functions, real-time databases, and hosting. Lots of time and resources do not have to be spent on creating backend explicitly. Flutter can be integrated with tools for automating development and deployment. Therefore a dedicated DevOps support is not required.

Widgets like the Appbar, Drawer, Snackbar, Scaffold can be used in a nested way so that app can work equally well on different platforms.

Flutter comes with a variety of themes, for every platform to give it a unique appearance.

Code magic is an open source CI tool that makes build process seamless. It is specifically optimized for Flutter.

Taking the Stand for Flutter

Presence of single tech stack, UI Elements (UIKit that runs on rendering engine and its own framework that is a tree of stateless and stateful widgets) and rich testing support make it most sought after the framework for Android and iOS app development.

The absence of repetitive Gradle Build time attracts many developers towards Flutter. DART gives iOS and Android development community more reasons to love Flutter as it is one language that winds over front and backend development equally well. Finally, high speed of animation adds to the topping over the cake bringing Flutter back in demand.

Additionally, Flutter offers smooth performance with its flexibility to build a cross-platform application customized with web wrapper option. Currently, Flutter App Development is one of the best options available in mobile app development.