How is a receding hairline treated?

Receding hairline is a widespread issue these days and is one of the initial signs of male or female pattern baldness. Usually, hair loss is treated with the medications and hair restoration techniques. This problem is common in men but women experience hair thinning that than of a receding hairline. However, there are chances that a woman can suffer from diffuse hair shedding above the temples of the hair. In general, the victims of such hair loss are prone to suffer from pattern baldness.

On average, we have almost 100, 000 hair strands on our scalp. Hair falling is the natural part of the hair growth life cycle. There is nothing to worry about if you lose a few of your hair strands while coming and washing. Hair tends to replace itself with the newly grown hair. The actual problem starts when you don’t observe the appearance of new hair. As a result of which your hairline begins to recede into a V-shaped curve. This condition is commonly known as receding hairline. Basically, there can be two reasons for this problem:

Studies have shown that receding hairline is a genetic trait, which leads to partial and complete baldness. For example, your father has lost his hair at a young age, there is a great possibility that you might also suffer from this problem at the end of the puberty. For such victims of pattern baldness, Toppik Hair Building Fibers is an ultimate choice. 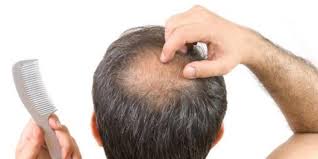 In some cases, hormonal imbalance can be a challenge for your hair. Diffuse hair shedding usually occurs as a result of hormonal disturbance. Receding hairline in women arises during menopause. It is suggested to seek medical help or consult your dermatologist.

Generally, hair pulling test is performed for the complete diagnosis of receding hairline. A few of your hair strands are being pulled in order to count the ratio at which your hair is falling off. After the diagnosis, there are following treatments are suggested to eliminate this problem:

There are medications that slow down the process of hair fall. Topical minoxidil can be helpful in overcoming receding hairline. However, certain side effects like a headache, itching, numbness, and hair growth on the face can be experienced.

Hair transplant is a surgical way of getting back your hair. It is a complicated process which leads to discomforts like scarring, bleeding, infections, and extended healing time period.

It seems ridiculous to spend huge money on inefficient techniques. What is better than preserving your goods looks as well as health? Off course nothing is! Concealing your receding hairline with Toppik Hair Fibers is the safest choice. However, Toppik Hairline Optimizer helps you to achieve and maintain a fuller yet natural hairline.

IV Hangover Cure – How Can It Help You? Best way to Do Influencer Marketing

Health Care Beauty Products to Consider On Your Next Shopping Trip

How can I get glowing skin at home?

Learn Everything About Daily Night Cream Routine That Need To Follow