1. Improve adaptability of die casting mould
Preventing faults in mould production is a long-term and difficult task. Seemingly very small problem can lead to a sudden risk in the process of automated production, even batch waste, causing unnecessary economic loss for the enterprise. So, start from the design phase, enough attention should be taken to these small problem.

(1) Hydraulic cylinder replace inclined guide pillar
Die casting production automation contains release agent spraying automation. At present, a lot of common sprayer are double axis servo system and an old-fashioned brass nozzle sprayer (of course, there are a few robot spraying). These two kinds of sprayer enter vertically from the top of parting mold, according to the instruction of control system, move sprayer up and down to a certain speed, spray and blow air to the surface of fixed and moving die for a certain time. Due to the sprayer should enter from the top of the mould, the original design of inclined guide pillar core-pulling that on the top of the mold must be changed into the hydraulic cylinder core-pulling device (see figure 1), otherwise it will affect the sprayer nozzle, even damage the sprayer. Automatic spraying process is far from to achieve the flexibility of artificial spraying, because it is according to the predetermined spraying procedures. For the parts that needs more spraying, automatic spraying often cannot achieve “special care”, especially for large block. After opening mold, the back of slider is still in the shadow of its own, failing to realize effective spraying (see figure 2), therefore, this need adding inner spraying system in the proper part of mold slider, to realize complementary spraying at the back of slider.

(2) Cooling system
It is necessary to have a detailed understanding and estimate process parameters when designing cooling system. In the whole casting process, metal liquid injected to mould has become the only source of heat. People should consider if the die-casting mould can have the effect like “radiator”, and have a detailed calculation for releasing heat of metal liquid and the heat that can be taken away by cooling system. When the two kind of heat is close to continuously injecting metal liquid, the die mold reaches thermal equilibrium. After get these ideal conditions, it must be kept, then realize the normal and stable production conditions. To optimize the design of cooling system, people can adopt the die casting CAE software for simulation calculation, and then improve the original design of cooling system, ensuring balanced and consistent mold temperature. 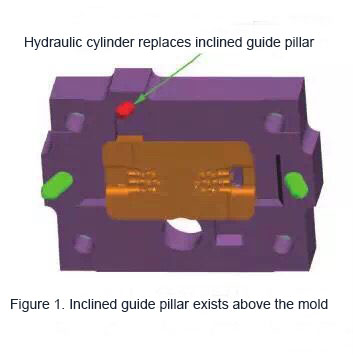 (3) Reliability of mold core
Mainly manifested in two aspects: one is the bending fracture, the other is backward core. According to the bending fracture of core, here are some measures: (1) Strictly control length-diameter ratios of small core, reduce the possibility of core bending. (2) Avoid directly hitting small core from ingate. (3) Try to minimize the core orifice chamfering, avoid using benched core, eliminate stress concentration of mold core, as shown in figure 3. (4) Adopt high quality steel and proper heat treatment process, improve the quality of small core. (5) Carry out surface treatment for small core, subtract holding force of small core. Usually there is a hexagon socket set screws with cone point at the tail of quick-change core. During use, loosen screw or failed to screw tightly after replacing core will lead to backward core back. Usually the solution is adding hexagon socket set screws with cone point. At the same time, strengthening examination and acceptance after repair mould can basically ensure cores do not back.

(4) Stability of ejection system
The design of ejection system involve more calculation, in most cases, mold factories will the the number of set ejector rob and the thickness of diameter and ejector plate. Hardly check the stability of ejector rod and the deformation of ejector plate. Bending ejector, broken mould the depth of ejector trace on mould surface caused by deformed ejector plate exceeding mould rejection because of machining allowance, theses are frequent occurrence. Therefore, in order to adapt to the automatic production of die casting, it is necessary to check the stability of ejector rod, withstanding thrust area. The stability of ejection system also is about the location of return limited block of ejector. Most of today’s return limit block is round limit block, as shown in figure 4. Due to the contact area of limited block and ejector is smaller, after long-term use, limit deformation occurred, causing unreliable ejection plate, ejector marks higher than casting surface, sometimes affecting the reliability of subsequent machining positioning, even resulting in mould rejection. Don’t set ejector rob like casting figure 2, if necessary, set assist device that can inject oil to ejector rod automatically, to avoid the ejector rod often get stuck and ensure ejecting mould successfully. 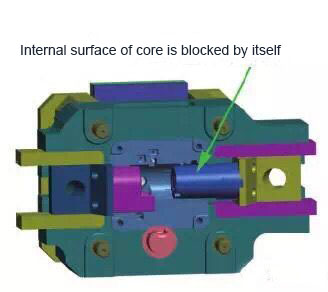 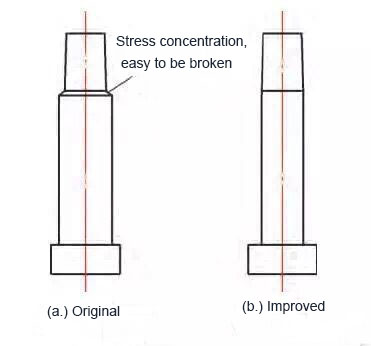 A Brief Discussion on the Four Major Kinds of Inventory

Smart Meters are here to stay