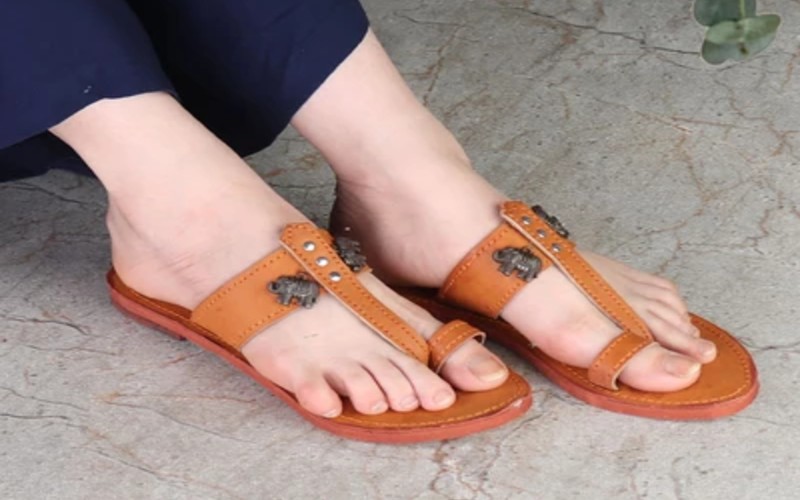 When it comes to traditional Indian footwear there are lot of names that can pop in one’s mind and Kolhapuri chappals is definitely one of them. This one is immensely popular all around the world.

Now as the name suggests the Kolhapuri chappals were first designed in a place called Kolhapur which is located in Maharashtra. They are mostly handmade but leather footwear which are later tanned with the help of vegetable dyes. The traditional designs of kolhapuri footwear are very famous in the rural areas of Maharashtra and people from all over India and in other parts of the works also pair them up with ethnic wears. This particular style of chappal has also been given some different names depending on the place they are manufactures in like Paytaan, Kapashi, Bakkalnali, Kachkadi, Pukari and many more. These chappals came to the scene as back as 13th century and since then it has been there down the line of Indian tradition.

Now what are the specialties of this chappal? Well as it has been mentioned earlier they are dyed with vegetable dyes and they are always open toes along with the T strap sandal. This is done by performing a series of chemical and mechanical operations. The leather used here is grazed and therefore they are very durable so that one can use them on a daily purpose as well. As the names of variations given above the varieties of kolhapuri chappals are known for their ruggedness and durability. They are also available in different sizes and patterns. In fact the modern day versions of these come with zari strips, gold cord, pom poms and other designs which one can easily flaunt in an ethnic party or in a wedding. One can wear them during both summer and winter and here the upper portion is made of leather and lower portion is made of leather.

In the ancient times people used some barks of trees and leaves so that they could protect their feet. This was slowly replaced by animal skin. After that modernization happened and types of leather were used to cover the feet. When it comes to kolhapuri chappals they were initially made by using bong toning and this was sourced from medicinal plants like Hirada and Babul. The leathers that were used were natural and they used to have small pores which used to absorb heats and gave a cooling effect not only to the feet but also to the whole body.

These days a lot of modernization on the shoes has taken place. Apart from modern leathers and manufactured leathers there are different kinds of hand-woven designs available on these chappals. Apart from kolhapuri, there are other traditional chappals as well in India which are also very popular and one can pair them up with ethnic wears. Among them Nagras and Mojris are the most popular ones. One can wear them in any traditional occasion if they do not want to use it as a regular wear.

How to DIY Clean Your Wedding Gown