Python vs PHP: The Best Language for Web Development 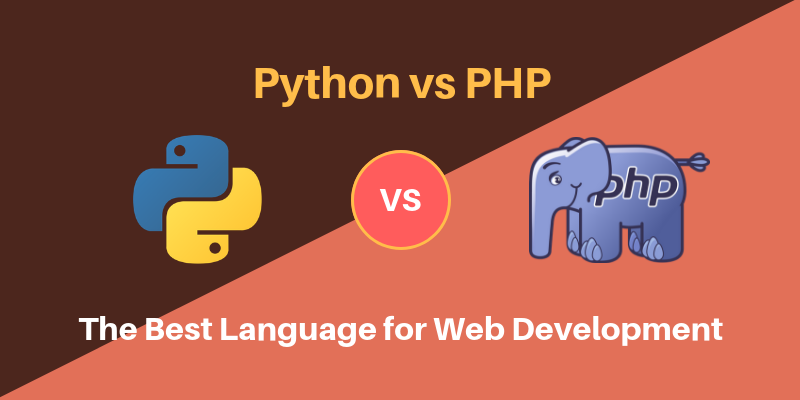 PHP and Python, owing to their divergent domains, are rarely mentioned together. PHP, for its part, is a web development language while Python is a general purpose language that’s used for building software of all types. But as divergent as they are, there is one case where they do intersect- backend development for web applications. So let’s pitch them directly against one another- Python vs PHP to find out which among them is better:

PHP is a server-side scripting language that’s used for building dynamic web pages and web applications in general. In fact, it’s so deeply entrenched in the web development ecosystem that almost eight out of every ten websites use PHP on some level. It is compatible with almost every popular database and web servers and thus covers a broad range of use cases.

Python is a general-purpose high-level programming language that can be used to build essentially any kind of application- from embedded systems to server applications. It is currently the most popular language and owing to its usage in emerging technologies like data science, it is only set to grow in coming years.

One of the key indicators of the competence of any language is how is easy it is to adopt and integrate with existing systems. In that sense, both PHP and Python have an easy learning curve but when it comes to integration with other technologies, they take a divergent approach. While PHP supports a much larger number of databases and web servers than Python, it lags far behind in terms of diversity in use cases.

Given that PHP runs on roughly 80% of the websites, it is supported by a vast community of developers and quality development tools. Some of the best PHP frameworks like Laravel or Yii are known to deliver excellent results. Python, for its part, is too quite popular but given its limited use in web development has much lesser resources than PHP. Some of the best Python frameworks like Django and PyPy are still among the finest.

PHP is known to struggle with scale. It’s not some inherent problem with performance but its code gets quite messier and gets too tough to effectively manage. Python has no so such problems. It is known for its neat and readable code that becomes a great asset for large scale applications.

Now, this is something that’s very tough to generalize as the performance depends to a large extent on the type of application you are building. PHP remains one of the best performers among other scripting languages like ASP or JSP. Python, on the other hand, has automatic garbage collection and dynamic type checking that gives it a slight edge in performance particularly for large applications.

As you may have learned by now, PHP and Python belong to two entirely different classes of languages. While Python, for the most part, maintains an upper hand, PHP reigns supreme for web development services. That is, if you are comparing these languages just for the purpose of web development, you should confidently side with PHP. Otherwise, if you want to learn a comprehensive language with applications across the board, Python should most definitely be your choice.