React Native vs. Xamarin: The Battle of the Best 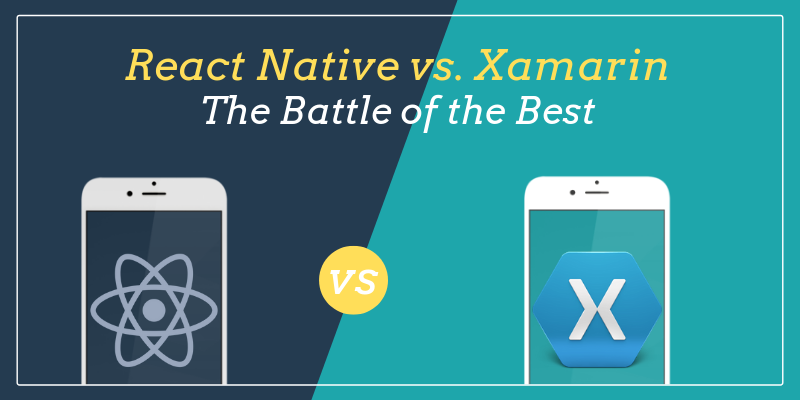 The quest to build cross-platform applications isn’t something new. But as applications these days yield immense influence and business opportunities, the race to build quality mobile apps in minimal time and resources has picked up the pace.

However, one of the key differences that we now witness is that while such tools were previously built and largely managed by open source community, are now products of some of the largest corporations. For instance, not only Android and iOS- two of the largest mobile platforms are owned by two of the largest corporations but React Native and Xamarin- two of the most popular cross-platform tools are also the products of Facebook and Microsoft- equally powerful tech giants. And it is in this light that the comparison of React Native vs. Xamarin gets even more interesting.

One of the key factors that determine the success or failure of any development tool is how easy it is for new developers to adopt it. The easier the learning curve, the quicker its community would grow.

React Native relies on JavaScript for building apps- a scripting language used by almost every web developer. This is one of the reasons it quickly rose in popularity.

Xamarin apps are written in C# and .NET which though have steeper learning curve than JavaScript, has the advantage of bringing a highly matured technology stack with already a large community.
This means while new developers lean towards React Native, the more seasoned ones still prefer Xamarin.

React Native still being a relatively new platform has an underdeveloped ecosystem. There are fewer quality IDEs and other code management tools compared to Xamarin.

In terms of UI and widgets, both of the platforms deliver almost native-like user experience but when it comes to brute performance, React Native falls a bit short. For instance, it doesn’t support 64-bit mode on Android and there are a few performance issues on iOS as well. Xamarin, on the other hand, does exceedingly well in those domains.

React Native deploys the more recent methodology of one-way data flow that works quite well with JavaScript. Xamarin uses the traditional Model-View method that works well for larger applications. Overall, there is no winner in here and it’s just a matter of preference.

Except for a few functional considerations, React Native and Xamarin are two equally good platforms for building hybrid apps. The reason React Native app development companies having started gaining market share has little to do with underlying features but rather the onboarding convenience. With JavaScript at its core, React Native attracts a really large pool of developers and that further feed on to its popularity and community-driven development.