What can I do if I’m being sexually harassed at work? 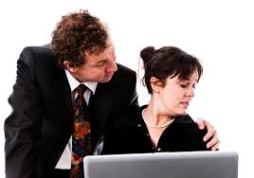 Behavior or comments can also be seen as sexual harassment if it is based on your gender or sexual preference.  For example, if you are a gay male and you are constantly being scrutinized at work for little errors that heterosexual employees are let off the hook for, that can be considered sexual harassment.  Other examples include cutting someone’s hours or constantly holding a person to a higher scrutiny than other employees based on the fact that he or she is gay is considered sexual harassment.
In general, there are two types of sexual harassments: quid pro quo and hostile work environment claims.  Quid pro quo is the act of asking for sexual favors in exchange for advances or benefits in the workplace, such as medical benefits, promotions, raises, and job duties.  An example of quid pro quo harassment is a supervisor giving an employee unfavorable shifts or duties at work because he or she refuses to go on a date with him or her.   Refusal to conduct these sexual favors results in a person’s inability to receive such benefits. Quid pro quo sexual harassment is typically an act conducted by a manager or supervisory employee and may also result in criminal charges.
The other type of harassment is called a hostile work environment.  Hostile work environment can be created by verbal or physical conduct that is sexual in nature.  Some examples can be unwanted hugging or kissing, looking at someone up and down in a sexual nature, making sexual jokes, or spreading rumors about a person’s romantic relationships.  A hostile work environment can also arise if the perpetrator retaliates against an employee for denying a request for a sexual favor or when the employee speaks up about behavior that he or she finds uncomfortable.  The hostile work environment can be harassment that is so unbearable that the employee is forced to quit because he or she can no longer stand working in those conditions.  The Court assesses the harassment by analyzing how “severe and pervasive” the actions or words were.  Several factors play into this analysis, including the frequency of the offense, whether it was verbal or physical, whether the perpetrator was a coworker or supervisor, and/or whether other employees joined in during the harassment.
It is a misconception that only females are sexually harassed in the workplace.  Men also are victims of sexual harassment in the workplace and face more challenges reporting such incidents because of the stigma associated with being a male victim of sexual harassment.  It is also a misconception that women are only sexually harassed by men or men are only sexually harassed by women.  Men are just as capable of sexually harassing other men, and women are just as capable of sexually harassing other women in the workplace.

It is illegal for an employer to retaliate against an employee who reports acts of sexual harassment in the workplace.  Retaliation can come in many forms, including terminating the employee, cutting back the hours that the employee is normally scheduled to work, reprimanding the employee for minimal errors that would have typically been overlooked, or not considering them for a promotion. If an employer terminates an employee for reporting an incident of sexual harassment, the employee can file a complaint with the Department of Fair Employment and Housing.  The complaint must be filed within one year after the discriminatory act occurred.  The types of remedies that are available for victims of employment discrimination include past lost earnings, reinstatement of one’s position, future loss earnings, punitive damages, and attorneys’ fees.
The laws governing sexual harassment claims can be complicated.  Please also note that your employee handbook may outline workplace policies governing sexual harassment that may be more severe than the actual laws.  If you feel that you may be experiencing sexual harassment at work and need a consultation to know your rights, please contact an experienced employment lawyer, such as Stevens and McMillan.

Casinos Online – An Necessary Solution to Enjoy and Produce Income

Casinos On line – An Necessary Solution to Appreciate and Produce Income